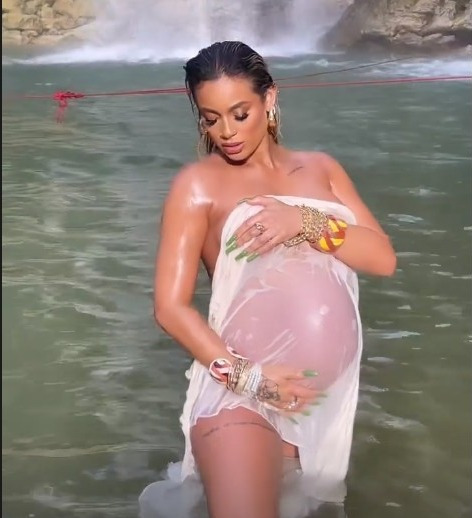 DaniLeigh is pregnant. The rapper and singer took to Instagram this week where she announced the news along with a set of maternity pictures showing her baby bump. Fans, of course, have been heavily speculating as to the exact date she began to show, pointing to a video where the singer was wearing an oversize shirt that fans believe was meant to hide her bump.While DaniLeigh attempted to keep the pregnancy a secret, a family member recently leaked a photo of DaniLeigh with her baby bump clearly showing. The singer finally confirmed that she was pregnant in a slew of gorgeous pregnancy photos, shared on social media shortly after the familial photo leak.

The question remains: who is the father? Even while rumors floated around, many were under the impression that it was DaBaby whose child she’s carrying. The couple had dated for a few months before calling it quits. The timing of the rumors and her break-up appeared to be aligned, but DaBaby nor DaniLeigh have acknowledged

That is until last night. After DaniLeigh shared a slew of new pregnancy photos, DaBaby finally acknowledged the news. He didn’t comment underneath the post or anything but his double tap was quickly noticed by Internet sleuths. While this is still the furthest thing from a confirmation that he’s the father, it appears that DaBaby holds no grudges against his ex, regardless.

A post shared by The Neighborhood Talk, LLC (@theneighborhoodtalk)

OFFSET SAYS HE WAS HACKED