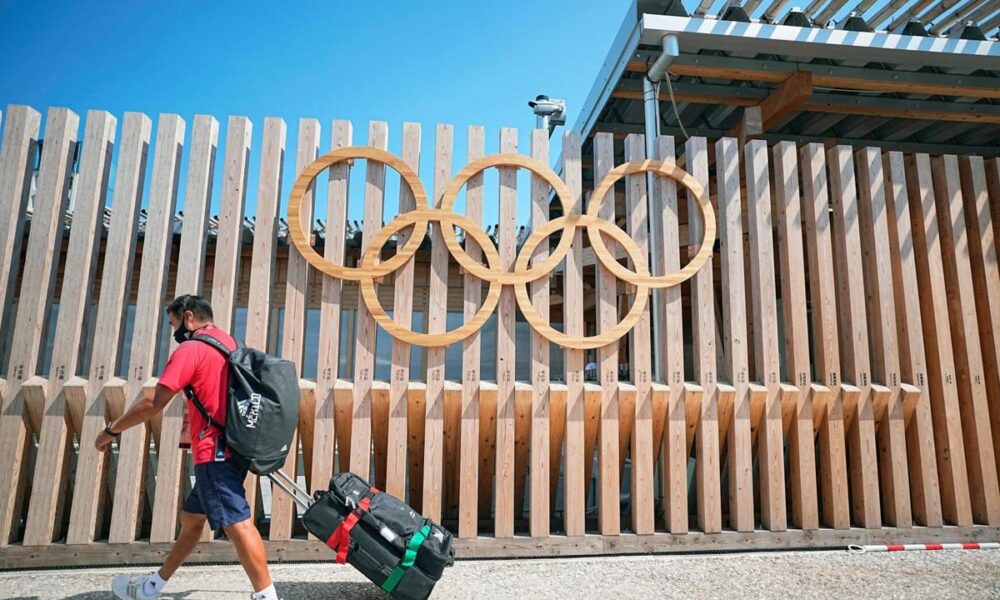 And as athletes have started to arrive ahead of the opening ceremony on Friday, the number of cases in Japan linked to the Games is now over 70, according to organizers.

“We cannot predict what the epidemic will look like in the future. So as for what to do should there be any surge of positive cases, we’ll discuss accordingly if that happens,” Muto said during a press conference held in Tokyo on Tuesday.

“During the last five-party talk, it was clearly stated we’ll continue to monitor the coronavirus situation, and a five-party talk will be held if necessary.”

“At this stage, the coronavirus situation might get worse or better, so we will think about what to do when the situation actually arises,” added Muto.

The capital is currently under a coronavirus state of emergency, which is set to expire on August 22, and organizers announced this month that the Tokyo venues will not have spectators as a result.

“Visitors, athletes, journalists, delegates, of course they are supposed to be within the bubble, but it’s not working well,” Shibuya said in an interview with Reuters on Tuesday.

“It’s obvious that the bubble system is kind of broken, so there seems to be some sort of interaction between guests and visitors and also local people.”

The International Olympic Committee (IOC) and Tokyo 2020 organizers did not immediately respond to CNN’s request for comment.

Tokyo 2020 will host about 11,000 athletes — representing more than 200 countries — and they will be staying in 21 residential buildings.

However, not all of these athletes will be in Tokyo for the whole duration of the Games. Organizers say athletes will be expected to arrive in the Olympic Village five days prior to their competition, and depart a maximum of two days afterwards.

Nausch, who becomes the third member of the Czech Olympic team to test positive for the virus, has left the Olympic village and is currently isolating.

“As a result of previous cases in our team, we tried to be extremely careful, unfortunately it did not work. I’m, however, very glad I’m in isolation before I can jeopardize someone else’s participation in the games,” said Nausch.

Shibuya added that he believes the “fundamental problem” has been the “lack of open transparent” discussion on how the Games can be held safely.

“There’s no way for them to track the movement of the people, and there is no quarantine for athletes and journalists for extended 14 days,” Shibuya added.

“In theory, if they could have implemented all of the measures, it could have been done, but realistically the bubble is not working.”

The International Olympic Committee (IOC) was not immediately available for CNN’s request for comment.

The opening ceremony is set to go ahead on Friday but it’s still unclear how many people will participate.

Organizers told CNN that “fewer athletes” are expected to take part because they are arriving in the country after the ceremony “in line with the restrictions that will be in force governing their length of stay at the Olympic Village.”

“We are conducting Delegation Registration Meetings with individual athletes, during which it is being confirmed whether or not they will participate in the Opening Ceremony,” Tokyo 2020’s press office told CNN.

“As these meetings will continue until the day before the Opening Ceremony, we are not yet able to provide a detailed estimate of the number of participants.”

World Health Organization Director-General Tedros Adhanom Ghebreyesus is in Japan and is due to address the IOC.

“May these #Tokyo2020 Olympics be a source of hope & unity to achieve #VaccinEquity & end the pandemic,” tweeted Tedro, who is usually known by his first name.

The IOC has unanimously approved a decision to include the word “together” in the Olympic motto.

IOC President Thomas Bach said the motto amendment is to “adapt it to our times” during the IOC’s 138th Session in Tokyo on Tuesday.

The amended Olympic motto is, “Faster, Higher, Stronger — Together.” It is the adaptation of the original motto in Latin that now translates as “Citiuc, Altius, Fortius — Communiter.”

“I think this is really a milestone in our development,” Bach said, “we want to put special focus on solidarity, and this is what the word ‘together’ manes, that we’re working in solidarity.”

The White House is blocking the Centers for Disease Control and Prevention (CDC) from testifying before a House committee on how to safely reopen schools ...